Its mid-week (yay!). This is also another long overdue post. I was putting off this for awhile as I have never done a travel blog. Mainly because I am not a savvy photographer. But guess what,! battling your inner flaws is your strength. So ta-da here it is! A trip to Paris. I traveled last year and only had a day stop over at Paris. So me and my colleague ( yes it was a business trip ) we extended a day to explore beautiful Paris.

We took a metro service called Thalys to travel from Amsterdam Central to Paris. A comfortable ride I would say. With Wi-Fi and lovely breakfast, it was worth every penny. 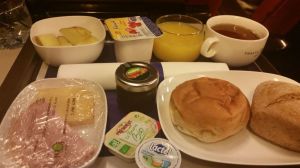 Since it was just a day trip in Paris, we dumped our luggage in – Mercure Paris Bercy Bibliotheque. It was one of the cheaper hotels in the vicinity although I found it quite claustrophobic.

We set off on foot to take in as much as our eyes and brains could load. Since my colleague has been to Paris a couple of times, he was my GPS. And an excellent one indeed 😉

After taking a train our first stop was to see the icon of France. Named after the engineer Alexandra Gustave Effiel – Effiel tower showed it’s massive height of 324m. And I tried to take a panorama shot,hope it does some justice to this beauty. 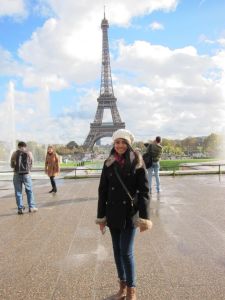 Just me taking a tourist shot 😀

I took way too many effiel tower shots, simply because I couldn’t get over the majestic look of it.

The next interesting monument that is very famous is Paris is arc de triomphe. It stands a whooping 50 m tall. Commonly known as triumphal Arch of the star, its iconography sets the atmosphere with triumphant patriotic messages.

Another historical artifact that i came across is Luxor Obelisk which dates back more than 3000 years. History states that it is originally from Luxor Temple in Egypt and was gifted to France by Muhammed Ali, Khedive of Egypt. Intricate detailing.

She is one of the patron saints in France who was falsely trialed and burnt at the stake at a mere age of nighteen, in year 1431 😦

We had to give our poor legs some love and rest before we continued our venture. A lovely garden situated in a bustling city. As everything else, this is also tied down with rich history. Created by Catherine de Medicis after the death of husband Henry II.

Chilling by the pond

After some needed rest, our next stop was The Lourve! More panorama pictures 😀

Panorama shot of The Lourve 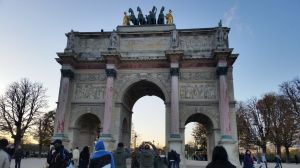 Situated at Napoleon Courtyard of the Palais du Louvre, the pyramids looked just like magical glasshouse!  With its origin dating back to medieval times and it used to be actual seat of power in France till 1789 as it was a former royal palace. Unfortunately time didn’t permit us to visit the museum 😦

Our last stop was Moulin Rogue. A sexy and vibrant windmill house which absolutely lit up the area!

The original house was burnt down in 1915. This is place is often associated with the birthplace of modern can-can dance. Previously it used to be a zone for seductive dance which evolved as musical dance entertainment for present times. Thus making it a tourist destination. Don’t you love the colors?

Paris takes your breathe away at every nook and corner. Almost all the building’s architecture is mind blowing. The immense depth of history and beauty stops you in your track. One pair of eyes isn’t enough to take it all. The French definitely had a great taste and needless to say, I fell in love. I can’t wait for my next trip and I am definitely going to Disneyland !

*P.S : This is my first travel blog. What do yo u guys think of it?